The DevUtil tool (available for LMD VCL Complete customers with SVN access) was updated (e.g. with Delphi/C++Builder 10.1 Berlin support) and improved. It is now easier than ever to switch between different workspaces (sets of component packages), even leaving the current IDE is no longer required!
[Top] 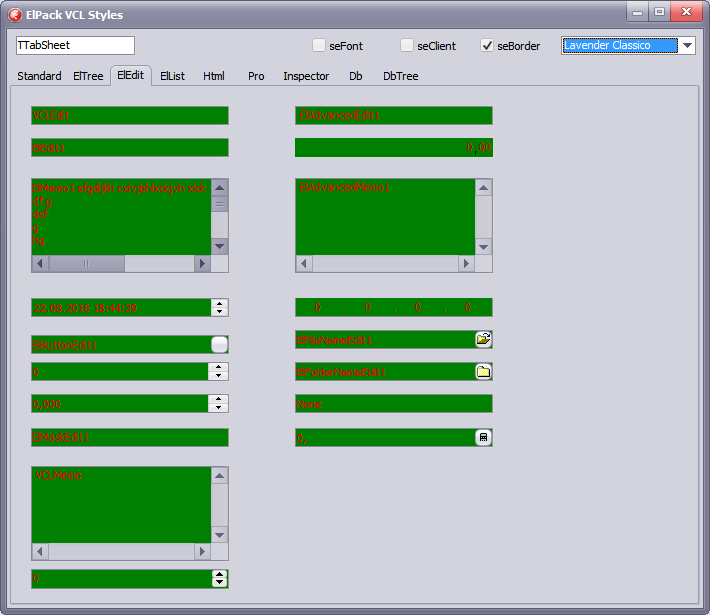 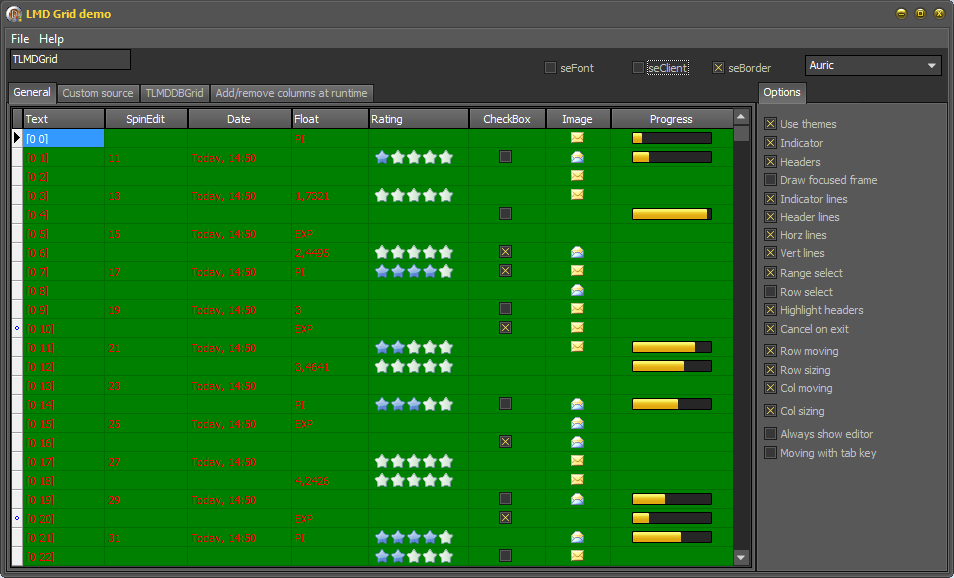 AnyLogger Client was part of LMD VCL package since release 2009, but for the 2017 release the application received several improvements and new features. For major packs installer (compiled versions of LMD VCL Complete, LMD ElPack, LMD-Tools or LMD IDE-Tools) the AnyLogger Client is now included in and installed into the \anylogger subfolder and can be used from your applications without further downloads (see also LMD LogTools tutorial).
Here are several screenshots of this overworked version: 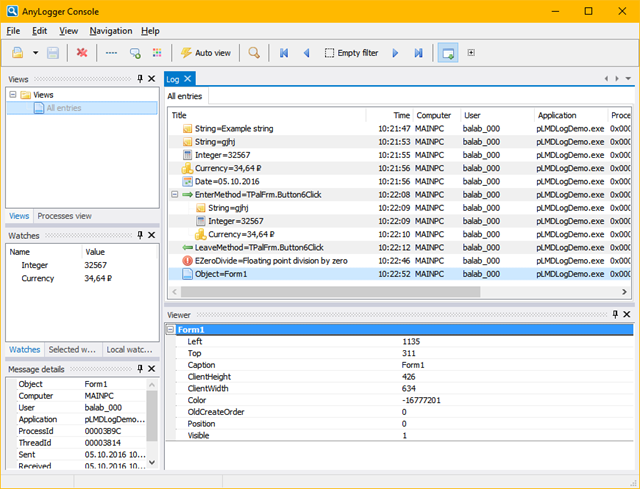 LogTools package provides methods to log any object at runtime to the AnyLogger console.
[Top] 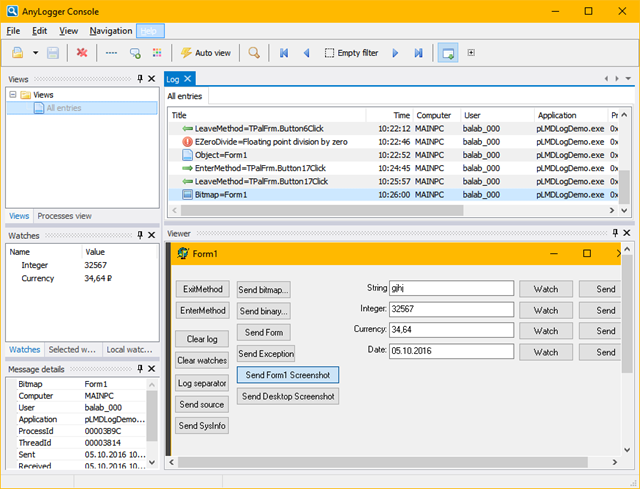 Sending screenshots of the current form or the full desktop can be achieved with one line of code. 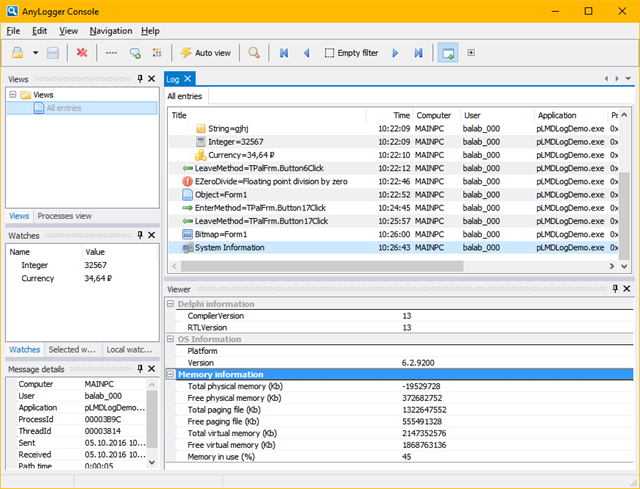 Full AnyLogger source code is included in all major standalone packs (full LMD VCL Complete is required to compile all parts out of the box) - so creating your own AnyLogger version with custom branding or additional features is quite simple. AnyLogger demonstrates also usage of LMD PluginPack which allows to add custom plugin viewers in a simple manner.
[Top] 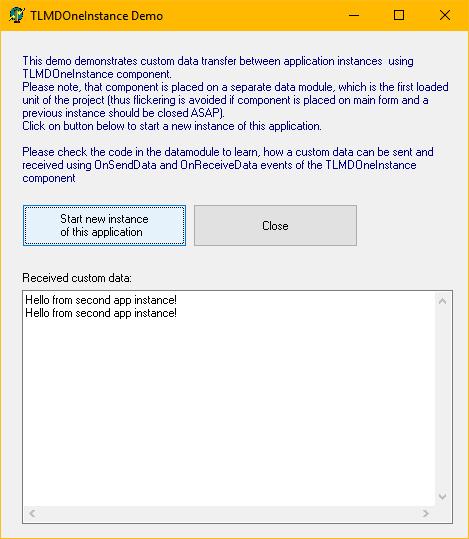 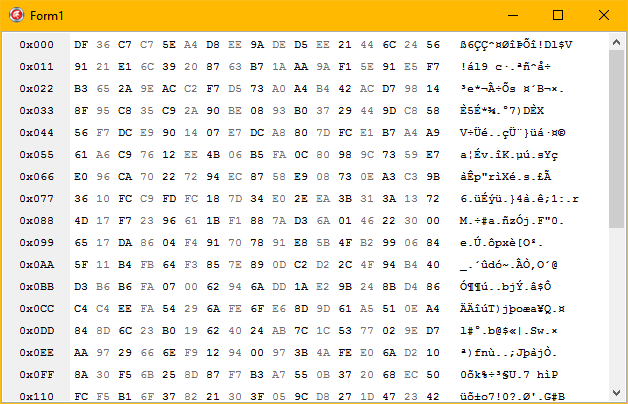 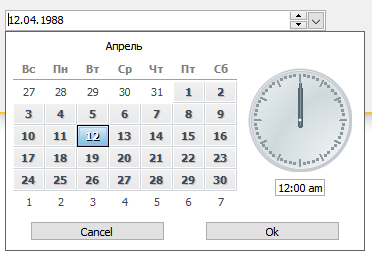 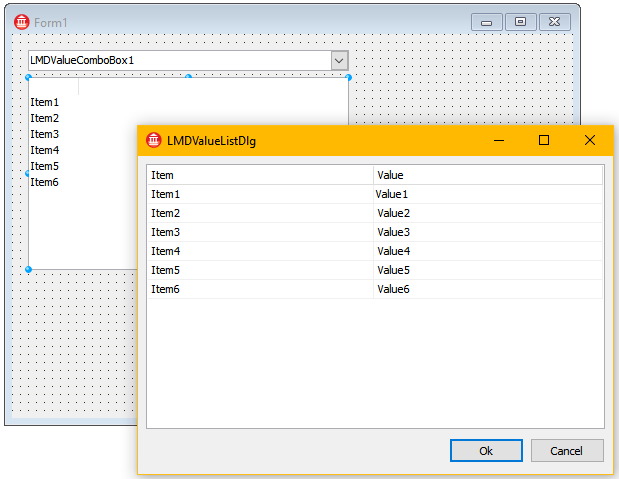 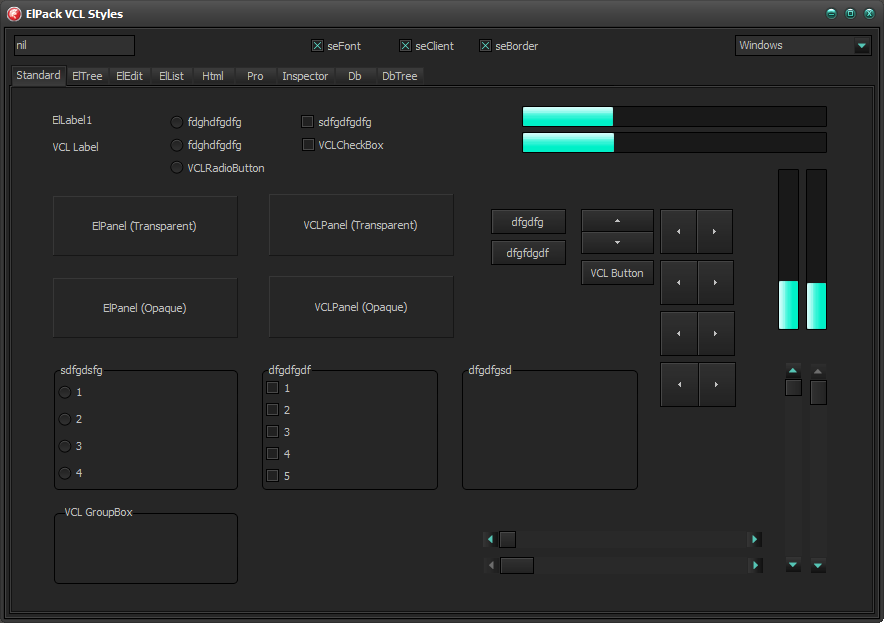 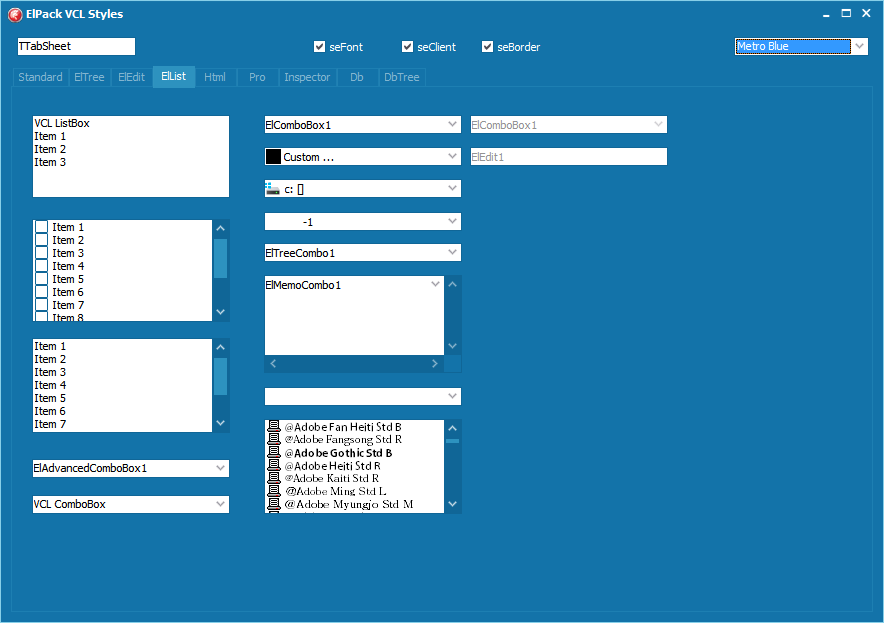 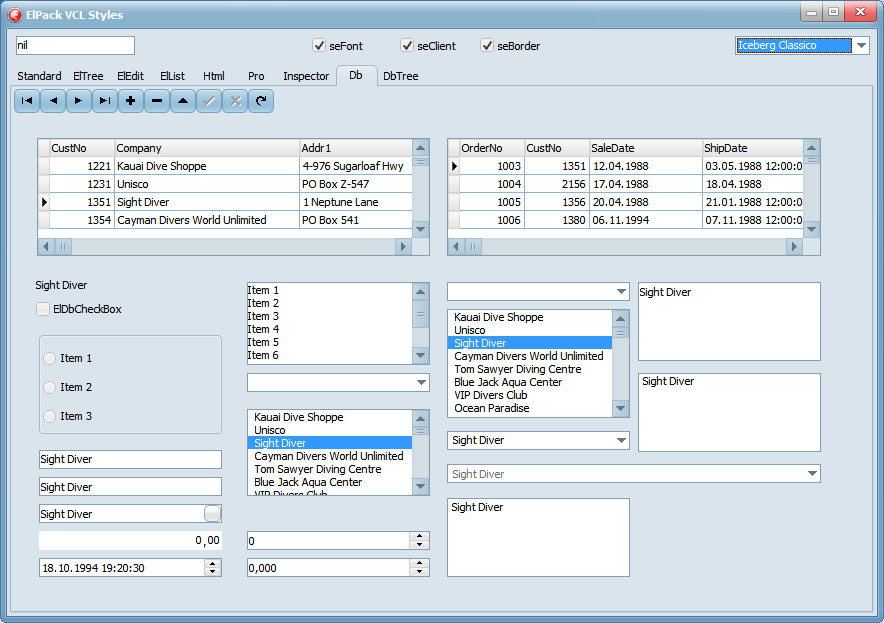 [+] Improved VCL Styles support including StyleElements property support
[+] Notes about StyleElements: TLMDGrid already has advanced coloring support in VCL styles mode. Formerly, if some color property is set to system color, like clWindow, that color is transformed to the corresponding VCL style color; however, if the color property is set to explicit color value, like clRed, the color is used as is, even if VCL styles is turned on. So, StyleElements implementation, just disables this automatic color transformation to keep backward compatibility.
[+] TLMDScrollBoxExt: HorzScrollBar/VertScrollBar properties type has been changed to TLMDScrollBarObjectExt, which additionally provides read-only access to scrollbar's Min and Max properties and read-write access to Position property.
[+] Improved VCL Styles support as shown in following screenshots: 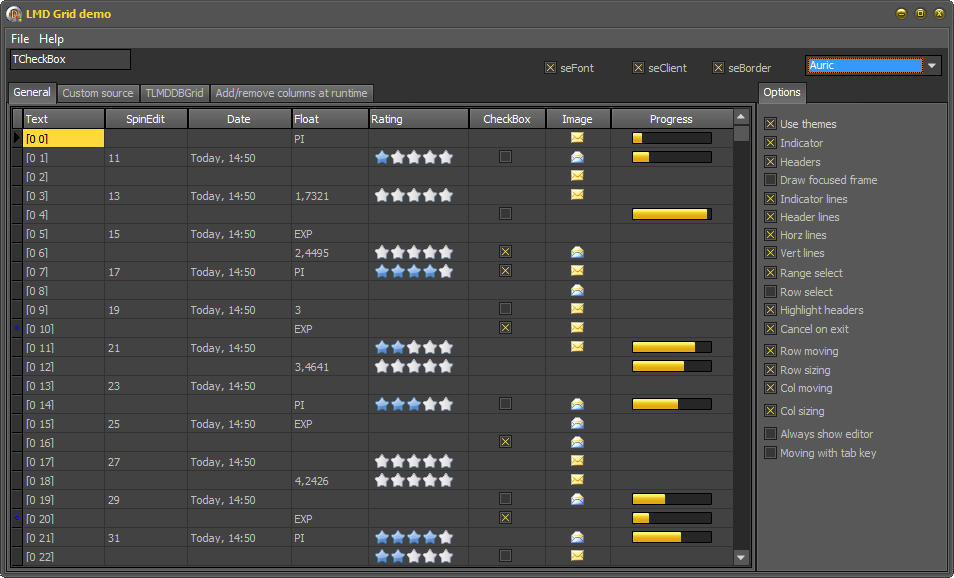 [-] TLMDCheckListComboBox bug with scrolling by mouse wheel in Windows 7 has been fixed.
[Top]

[+} Embedded graphics support in printing and preview via TLMDRichEditPrintTask (in connection with LMD-PrintPack): 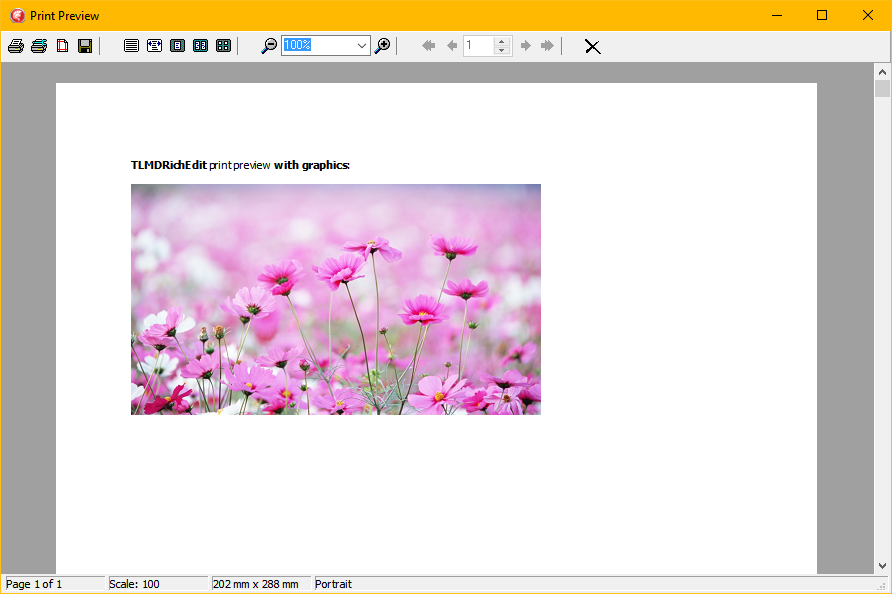 [+] NEW FEATURE: Alpha blended shadow around floating form windows (extending the thin (one pixel) border in previous releases). Resizing of floating forms is now much more comfortable. The shadow (or glow) look is a part of the style, thus it can be customized by using the Style Editor.
[+] Several built-in styles (VS2012 based) were updated to use new shadow feature.
[*] TLMDDockStyle.GetElem method has been made public to allow dynamic style change.
[-] BREAKING CHANGE: TLMDDockManager.StayFloatFormsOnTop property is deprecated and is longer working. In previous releases this feature worked differently in older and newer IDE versions. Starting with release 2016.4, functionality is the same over all versions (like in latest VCL releases floating forms are owned (in Windows sense) by the main form, and always stay on top of it (without using WS_EX_TOPMOST flag).
[-] The bug with invalid layout changing, while minimizing initially maximized application's main form was fixed.
[-] Floating form glow bug has been fixed.
[-] Docking zones bug fix.
[-] The bug, which prevented finishing Windows session has been fixed.
[-] The bug "Cannot dock to floating panel when floating over another dock site" has been fixed.
[-] Floating form glow issue fix, happened while minimizing floating forms.
[-] A bug with parsing hex colors in older (non Unicode) Delphi versions was fixed.
[-] Several minor glitches in VCL Styles support were fixed.
[Top]

[-] TLMDRichEdit: A bug with line wrapping in (built-in) print functionality was fixed.
[-] Invalid PageMargins bug in TLMDRichEdit fixed, which occurred when printing rich edit content via its Print method. [Top]