For recent Delphi releases LMD VCL package support same platforms as the VCL which is included in the IDE (e.g. Delphi 2009 officially supports Win2k or better only). [Top]

This change simplifies porting projects (supposed they are compiled with run-time packages) to another IDE version. Since package references contain neither IDE version nor LMD platform version, migrating to a future IDE version will require no changes.
[Top]

Since version 2014 all Regutility installers are digitally signed. This will reduce number of heuristic "virus/trojan" warnings from internet security packages (which raise false alarms because of not widely used installers. Which is no surprise, because each regutlity installer is unique).
Since version 2013 RegUtility installer copies all files to the %APPDATA%\LMD Innovative folder (instead of system folder in previous release). As known from previous releases the new reg utilities recognize earlier license files (regardless whether they are stored in system or appdata folder), so that only one reg utility is required for current and previous licenses.
[Top]

The DevUtil tool (available for LMD VCL Complete Subscription customers with SVN access) was improved. It is now easier than ever to switch between different workspaces (sets of component packages), even leaving the current IDE is no longer required! All new functionality will be described on the [LMD VCL - DevUtil|DevUtil description] page.
[Top] 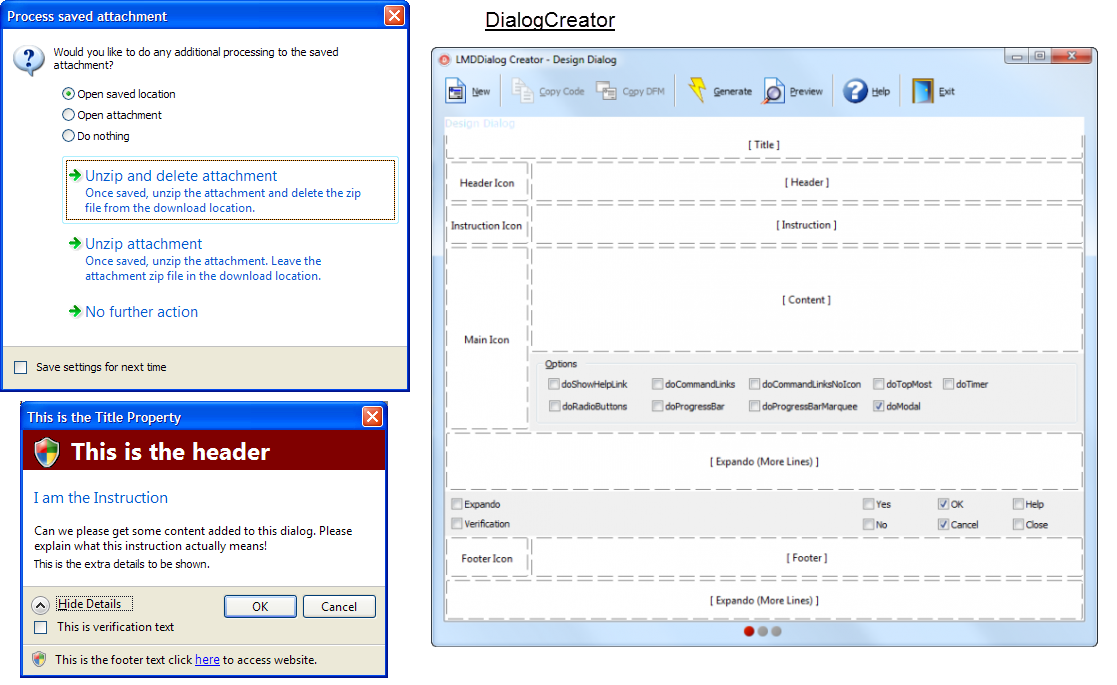 LMD GridPack was extracted from the LMD-Tools product and can now be purchased as standalone product (it remains included in LMD-Tools, though). Dependencies from LMD-Tools were removed, nevertheless LMD GridPack (as standalone pack) includes LMD Core Package (including almost 100 LMD-Tools base controls). Other major new features are: 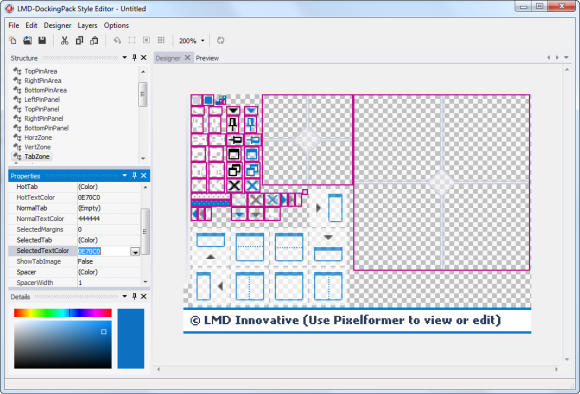 [+] New! Style Editor application, which allows to design new or modify existing dockimg styles. StyleEditor provides graphical master bitmap viewer with Zoom and Pan capabilities and alpha channel support; porperty inspector, which allows to edit style elements properties using specialized property editors; HSB color editing/picking and graphical master bitmap region selection. Also, interactive preview f designing style is provided. [+] Document tabs scrolling feature has been implemented. New TLMDDockManager.ScrollDocTabs, TLMDDockZone.FirstTab, TLMDDockZone.ScrollToTab, TLMDDockZone.IsTabInView properties/methods has been added. Scroll-left and scroll-right tab area buttons were added to styles.
[*] Document tabs painting bug fix. VS2005 style improvements: anti-aliased tabs (all: zone tabs, auto-hide tabs, document tabs).
[*] MainformTaskBar issue - Assertion for developers added.
[-] Fixed: Crash on un-dock auto hidden panel with a frame with a win control inside
[-] Bug fix: When Docking Panel is unpinned and, you hover the mouse ober its Tab, it pops into sight and then you grab the caption and drag it. If there are components on the panel that want to repaint themselves in various conditions you get an access violation.