All image list component, including standard TImageList provides some sort of intrinsic transparency. For example:

The icon, shown above, can be imported into image list differently, and will have or have no transparent parts depending of transparent color, specified during importing. 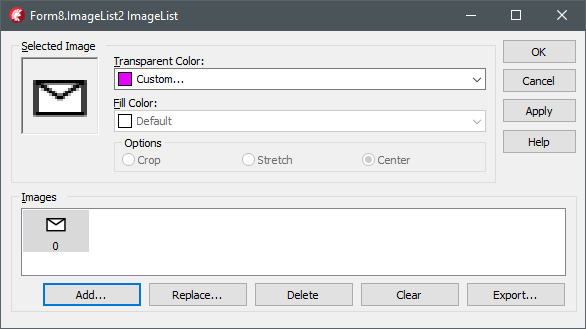 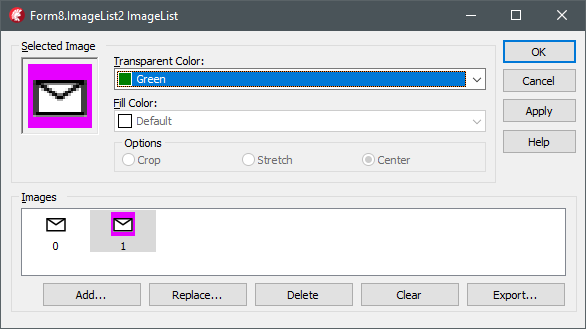 As a result we'll get two different image list items with different transparent pixels, generated from the same image file. And the second item have no transparent pixels at all, so its magenta backgound should be pained as a part of image to the final destination canvas.

Note also, that transparent colors are not a property of image list items. Colors was used only during importing. 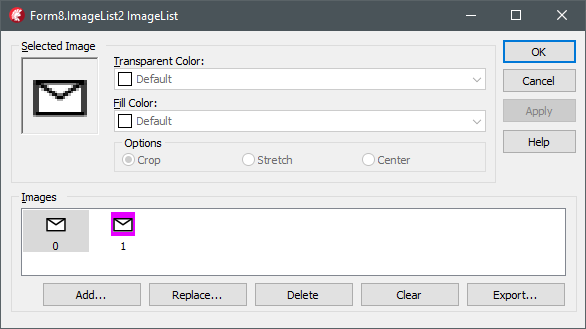 Imagelists with 32-bit color depth provide native support for alpha channel transparency. By default (which is important to note), all importing 32-bit bitmaps are treated as a transparency-enabled by the component editor.

As well virtual image lists can import 32-bit bitmaps, pngs, ect. So, such image lists provide complex (not quite understandable) intrinsic transparency, which we should respected.

LMD image list component provides TLMDCustomImageList.TransparentColor as an "official way" to get information about item transparency. This is used in LMDIMLTransparentColor global function. 32-bit images are not supported currently.

For image lists with 32-bit color deptch we adjust destination bitmap pixel format to be also 32-bit, and alpha format to be defined.

For other (24-bit) image lists it's hard (if not impossible at all) to deduct which transparency rules are really used. Moreover, TCustomImageList.DoDraw method is virtual, allowing descendants to do anything. So, in this case we have no better solution than to draw image list item into bitmap, prefilled with some exotic color, and then use this color as a transparent color key. I've declared the following global variable for this:

This way all intrinsic image list transparency, described above will be respected as much as possible.

For controls, which provide TransparentColor customization property, the property value is used to fill buffer bitmap instead of global value described above.

As noted above, 32-bit bitmaps loaded into Glyph property are treated as alpha-enabled. However, we cannot set original bitmap AlphaFormat to afDefined, because this causes internal bitmap data to be premultiplied. And this is wrong, because published property data should be leaved unchanged for potential dfm (re)saving at design-time.

So, any Glyph property graphics have to be copied into some temporary buffer bitmaps, in which alpha support can be turned on. TLMDGlyph class caches and reuses such buffer bitmaps.

Other (24-bit) graphics uses standard TBitmap.TrnsparentColor feature to auto-detect transparent color, unless the control provides its own color property.

So, it seems that any kind of transparency can be represented with simple TBitmap object, and transfering additional parameters such as TransparentColor or Mask is not really required. However, for now, and for more explicit code, I've declared special TLMFGlypTransp record with some public methods for explicit configuration.

LMDIMLItemBitmap function was also modified to produce 32-bit bitmaps if required, and to support prefilling of 24-bit bitmaps with required color-key.

TLMDGlyph class was changed also. It does not use image lists to cache bitmaps anymore. Inidividual TBitmap objects are used instead. Both: color-key and alpha channel are supported.

Also, TLMDGlyph class got new OnGetBitmap event, which allow to grab the bitmap from other sources (such as image list or standard glyph from resources) leaving Glyph bitmap unchanged.

Controls, which provide several glyph sources, like Glyph, ImageList/ImageIndex, GlyphKind properties now implement mutual properties semantic, e.g. setting one of the properties will reset all others to default values. TLMDGlyph.OnGetBitmap is used internally.

In Delphi action only takes care of ImageIndex property, so, control's ImageList itself is not affected. I've adjusted this strategy to the following:

Linked properties are not stored in dfm.