In current releases VCL only is (actively) supported. However for all pacckages support of FMX is in preparation (exceptions are e.g. windows only related features like the native TaskDialog implementation).

NG ConnectionPack (XE and higher only)

NG SerializerPack (XE and higher only)

NG SerializerPack provides the ability to serialize/de-serialize Delphi objects into various storage formats. Any public (not only published!) property can be automatically handled by the engine. This allows to write data applications in a more object oriented and simpler way. NG SerializerPack uses enhanced RTTI features and supports latest features of Delphi/C++Builder runtime (like e.g. Generics).
Common use cases of a serialization engine are:

A set of lightweight controls for HTML display (supporting a subset of HTML tags). Advanced functionality like support of variables, internal controls, DB templates, images etc. is included.
Click on images below for more info.

NG-DialogPack is based on the features provided by Microsoft Windows Vista Task Dialog API, which allows to create and show Windows Vista (Windows 7) like dialogs. The package extends platform API with emulation mode, which allows to use NG-DialogPack components in previous OS versions, such as Windows XP. Also, emulation mode provides additional features, such as Input Dialog, which has no analog in platform API. 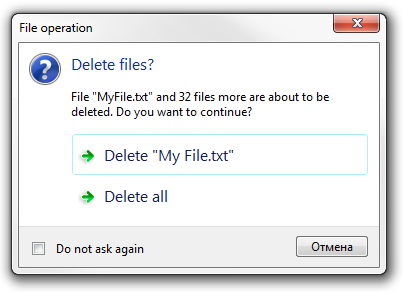 First two dialog components support advanced set of features, such as callback timer, OnButtonClick event with the ability of dialog content modification from the event handler, and navigation. [Top]

We are proud to introduce a simple, very convenient API for executing dialogs. The API is organized as static methods of TNGDialogs structure, most of which are overloaded. In most cases this API allows to show required dialog writing one or just several lines of code without placing dialog components on the form. The API provides replacement for standard Delphi dialog functions, such as ShowMessage, MessageDlg, InputBox and InputQuert to allow to show dialogs, compatible with task dialog look and feel. It also contains some additional simple dialog functions, such as Error, Warning or Information. All these function are overloaded, which allows to specify only required parameters.

Another part of Fluent Interface API is our unique dialog builders, available for task and input dialogs. Following are some usage examples:

will show the following simple dialog:

will show the following: 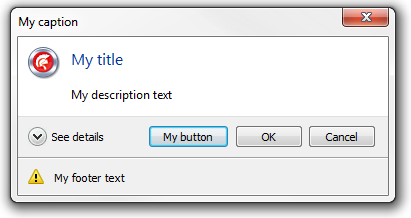 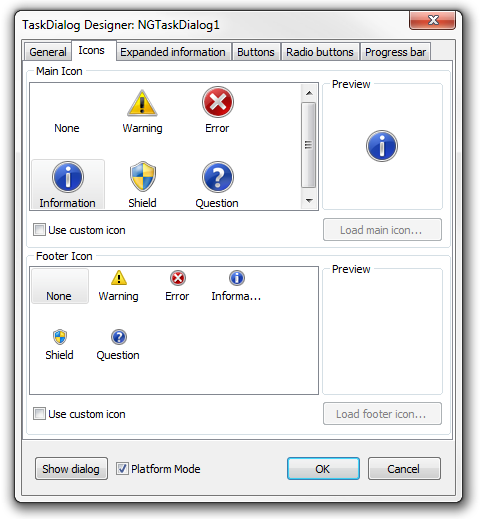